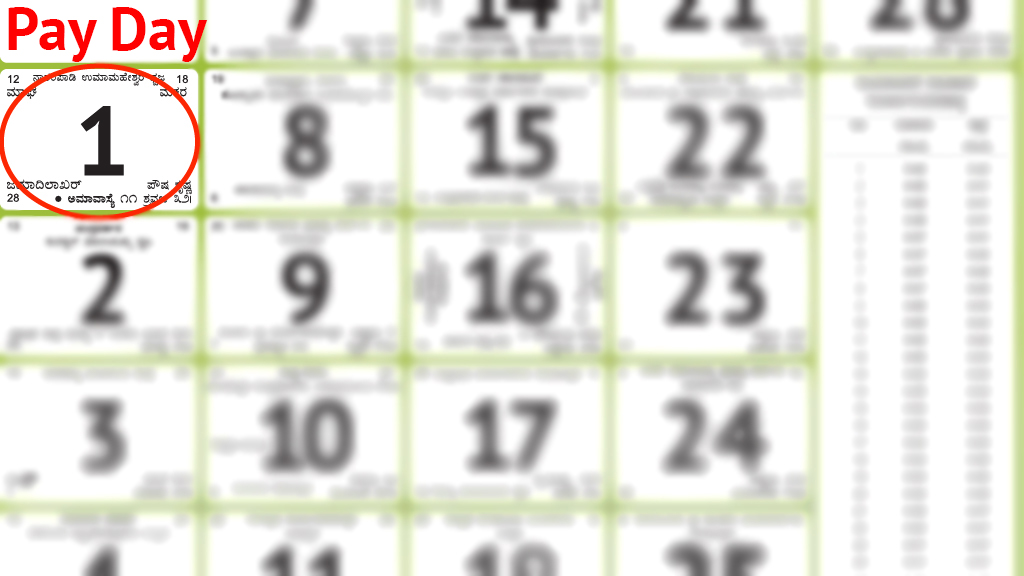 We have been hiring frequently over the last few months in Sales roles. New joiners would have worked in blue chip companies earlier. Some of their company policies will be very employee friendly. Having an open mind and progressive attitude, Cocoguru management would like to bring in those policies here. Few of the policies suggested were

Till now, salary payments used to happen on 7th of next month. The reasons were

Now, we are paying salaries immediately to permanent employees because

However, employees under probation will continue to get their salaries on the 7th.

I had been to Kalasa, Chikkamagaluru for developing our business there. While I was talking to a famous coffee maker Varamahalakshmi Coffee Works, he asked me how is that your coconut oil last much longer compared to other coconut oils? It was a great opportunity for me to highlight how different and superior Cocoguru coconut oil is compared to other coconut oils. Since he was curious, he listened carefully. Normally retailers don’t care, we rarely get to explain, if at all we get, they hardly listen. These are the factors which I explained

1. Copra making method
Copra is made from coconuts in 2 methods.

a. Fresh copra
Here fresh coconut is cut into two and immediately sun dried to get copra. This method is followed in coastal Karnataka and Kerala during summer and Tamil Nadu. Because of its freshness it would have undergone minimal deterioration.

b. Ball copra
Coconut with shell and husk is kept in attic for a long time to let coconut water in it slowly dry. After 6 months, moisture would have evaporated and kernel inside would become like a ball and separated from the shell. This type of copra popularly called as Tiptur edible ball copra is used for direct consumption. This method is used in Deccan platue regions of Karnataka. Those that are not in regular shape and size is used for oil milling purpose. Since the copra has become old, it would have undergone some deterioration. Milling copra is selected after selecting edible copra.

To make Cocoguru coconut oil only copra made from sun drying of fresh coconuts are used.

5. Oil Extraction
Coconut oil is normally extracted from copra in 2 types of machines, rotary and expeller.

b. Expeller
In expeller, copra with 2.5% moisture is crushed in an expeller, oil is then filtered online through filter press.

Cocoguru coconut oil is extracted from dried copra using expeller and filtered through filter press. Popular perception is that oil that is cold pressed/wood pressed/rotary crushed is natural and superior, also it looks white/colourless. It is suitable only for immediate consumption and yet very ineffecient. Oil yield is low, moisture causes rancidity. Roasted coconut oil extracted through expeller is long lasting, safe, aromatic and tasty yet retains natural properties.

7. Tight packaging
Packing is a way to hold, protect, carry and exhibit the oil. When done well, it goes a long way in ensuring shelf life and convenience of use. In our case shelf life increases from 6 months in PET bottles to 12 months in Jerry Cans.

8. Inventory management
We carefully manage stocks at manufacturing, distribution and retailer points to ensure the stocks are fresh and in good condition, so that consumers get fresh stock.

Overall, it is about careful taking care of each aspect of manufacturing and business process, not about chemicals and preservatives. For many manufacturers their scope ends when their products reach the wholesalers, for us it is about consumer experience.

Normally it is no big deal to set a MRP (Maximum Retail Price). All the battle is fought between competitors on the wholesale price. MRP is only a maximum, retailers can sell at any rate below it. Set it as a little high so that retailers can sell at any price they desire. It is only about printing on the package. There is no obvious consequence. Taxes are only on selling price not on MRP. But, we at Cocoguru look beyond the obvious, beyond only the retailer’s interest. That is in the interest of consumers. Retailers may sell at any price they desire, but there is a paying consumer. Manufacturer may sell to wholesaler or retailer, but brand ultimately sells to consumer. Brand must not leave too much of flexibility to retailer to dictate their price to consumer, it must be limited.

There is nothing wrong with protecting retailers interest as long as it doesn’t exploit consumers, does’t hurt the brand and his own reputation. 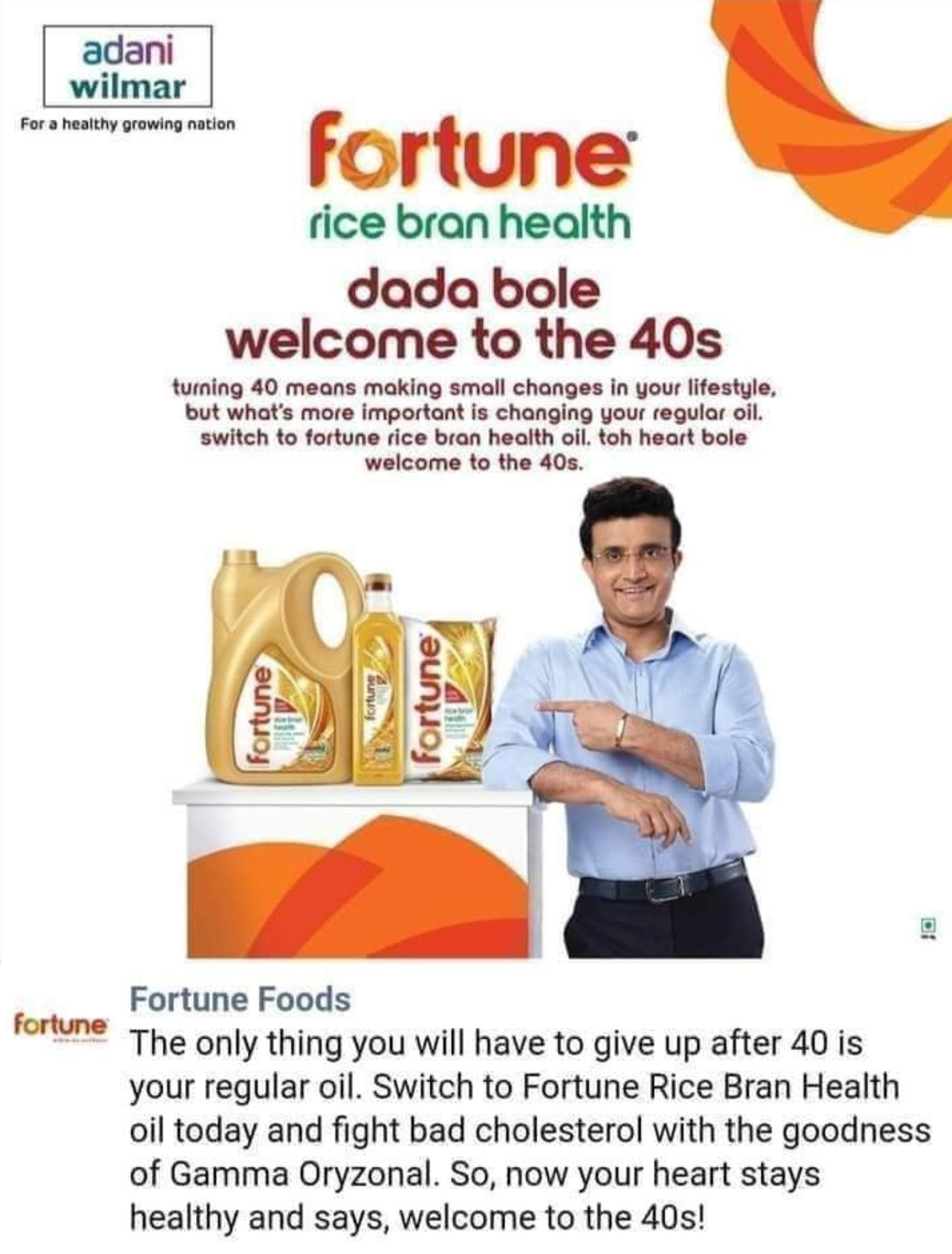 Saurav Ganguly, the price of Kolkata, former Indian test cricket captain, was responsible for building Indian cricket from the abyss of 2000 to what it is today. The post is not about cricket, but about the cooking oil he endorsed, his mild heart attack, trolling by individuals on social media.
It is unfortunate that our idol had a heart attack and as we had prayed, he has recovered quickly after Angioplasty. The moment news broke out about his heart attack, people remembered the product/brand he endorsed. The fortune brand refined rice bran oil marketed by Adani Wilmar, advertised by agency Oglivy and Mather that claims the oil to be heart healthy. Why did he get heart attack despite being a sports person at highest level and at a young age of 48?

At one level, it is unfair to target Saurav Ganguly or the brand Fortune for his present health status. Brand only claims that the oil is good for heart and never claims that no matter what you do, you will never get heart attack. Saurav on his part, despite following a healthy lifestyle had to get a heart attack. I promote coconut oil for cooking and hair but I am bald and I am not necessarily the healthiest. So, coconut oil or the brand Cocoguru is not responsible for it. But for that we need to think fairly, which doesn’t happen in the emotional world of advertising.

Should Saurav Ganguly promote the product/brand?
Saurav Ganguly has worked hard as a professional cricketer to achieve success he has and rise to be a nationally adored celebrity. He has borne the cost of being a celebrity also. It is only wise he uses his reach to commercially encash on his popularity. But people are only questioning his responsibility in choosing the products he has endorsed. I believe he must personally use it, must have done some basic research and liked it before endorsing it to others. I know Harsha Bhogle for one does the due diligence before endorsing a brand. A few cricketers like Hashim Amla don’t sport Castle Lager logo on their shirt though it is their national sponsor as it is a liquor brand. With financial commitments it is easy to endorse brands that pay the most. Sportsmen are also under the pressure to make money fast as they have limited time appeal mostly in their playing days when they are playing well.

Should the brand select Saurav Ganguly for the campaign?
The campaign is about being healthy even after crossing 40 years of age and Ganguly is a correct choice for it as he is an icon for all people across the country who are of that generation. But the brand’s advertising agency must have worked with Ganguly to find out if he really is a user of the product, does the product really promote heart health? For any long term relationship to work, deal must work fairly both ways.

Risk of having a personality endorse a brand
Nobody would have anticipated Ganguly suffering from heart attack, so the brand must be excused for not covering this risk. There have been backlashes in the past for celebrities taking political positions like Amir Khan, Deepika Padukone, Swara Bhasker etc and users have boycotted the products they have endorsed. Celebrities are humans after all and have their right to opinion and expression, but it runs the risk of their followers liking it or not. Using celebrities gives brands immediate benefits of reach and liking, but it also carries its risk.

Is there any logic, head or heart in promoting refined oils as healthy?
The low cost of refined oil gives its marketers the wide mass market for consumption and hence the marketing budget to spend enticing the users to switch to it. Refined oils may be devoid of impurities like free fatty acids, bad odour, extra colour, solid particles and moisture. But why did the oil have impurities in the first place? Because they were inferior grade oils that were made acceptable through refining. Crude, raw, filtered, cold pressed oils are extracted from superior grade oil seeds and ready of consumption as it is, without having to undergo refining. But they are expensive because such oil seeds are expensive. Crude oils are healthy but their manufacturers don’t have the marketing muscle to promote it to masses. Masses can’t afford it either. Masses usually succumb to dubious claims by advertisers especially if it comes from a celebrity. Recently, we decided to be active on social media and updated Facebook cover photo. A subscriber from Mangaluru commented saying your product is not available anywhere here. Fact is it is available at many outlets at Mangaluru. But he has a valid point, that it is not available at many shops where he has tried out. I replied saying that we are working hard to place the products at as many shops as possible. How is it such a hard work to place the products? Because of objections by retailers. Retailers have limited shelf space, inventory budget and no intention to promote any product. So, they will only sell those brands that are fast moving. Here are the common ways in which they object to our salesman when he tries to sell.